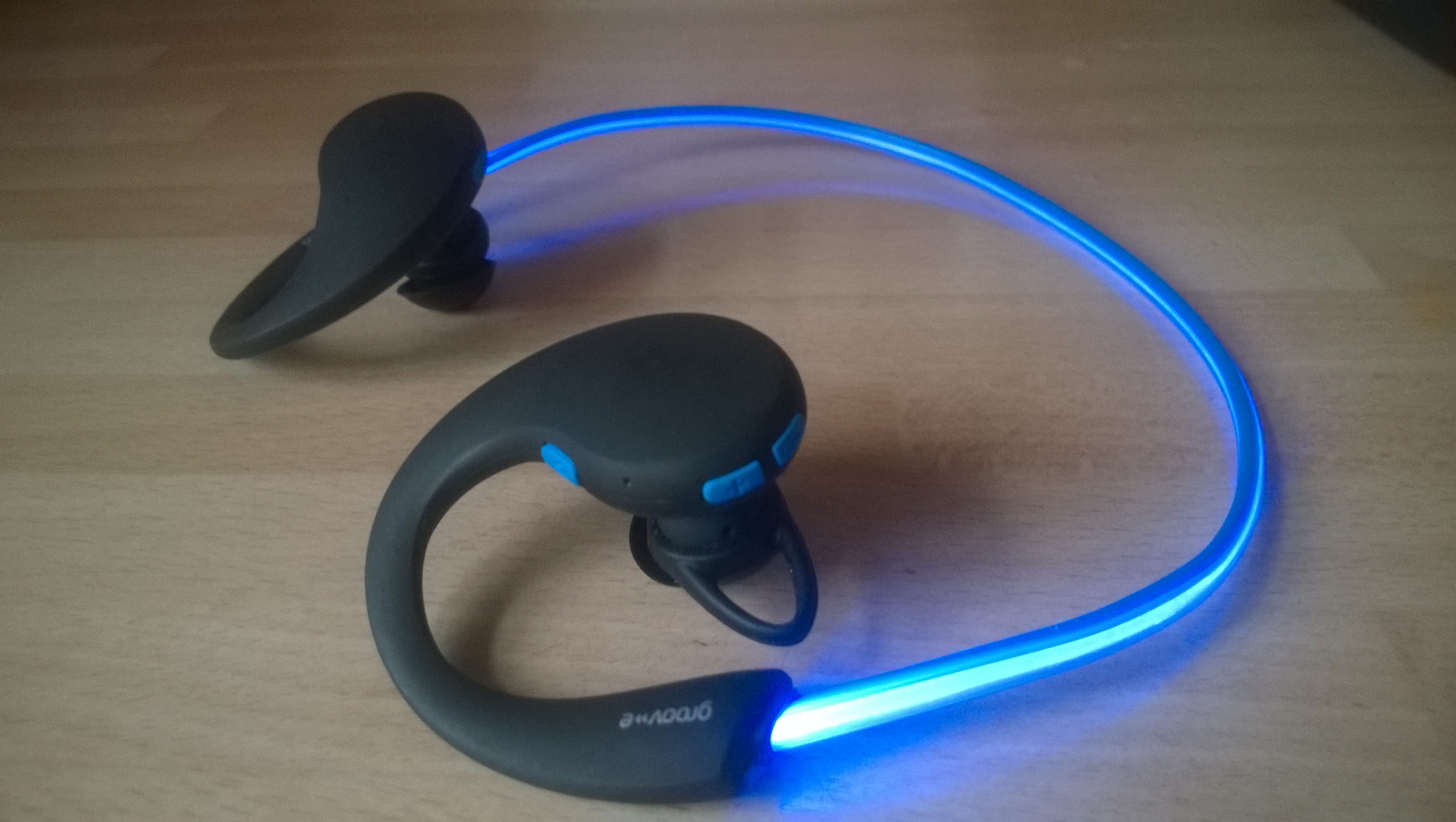 Wireless sports headphones are in no shortage with lots on offer to accommodate all kinds of folk and all kinds of pocket, Typically speaking on those terms you get what you pay for and in this instance you get a little more than you bargained for with the extra LED lighting which is ideal for night running and so on to make you visible which is important with the dark evenings creeping in and not forgetting the mornings.

The Groove-e LED Wireless headphones come packed as standard with a nice presentation as always with lots of information on the exterior which is good to see from a consumer’s point of view to get quick access to all the features on board. Check out the unboxing below for more on that.

The build quality is good here with an improvement over past offerings and they are also light and well constructed,The headphones have a good texture and grip and can easily be folded up into a pouch provided in the packaging which is handy for carrying about if you are not the type to leave them around your neck..

Features are aplenty and what is expected in todays offerings for headphones,first off they are IPX6 rated which is sweatproof which is enough for the average user and as mentioned they are robust and will take plenty of knocks should you drop them. There is a built-in mic so you can take calls which seemed pretty clear to me and there is good sound with a decent bass level to it too. Controls are small but prominent enough for easy navigation and like with any new product you will find these controls with ease after some use..

On the right side is the charging port via micro USB and Play, volume up/down toggles which also serve as a multifunction button. On the left side you have the LED control which has several settings, ON/OFF and the option LED light setting which is solid flash,and intermediate flash and constantly lit.

They sound good not bad for its price point and the average user will be happy with whats on offer, Depending on volume levels and music you may find some distortion but overall they reproduce highs,lows and mids adequately and calls are crisp and clear..

An important feature for many,However these just have a120mAh battery on board and give a playing time of up to 8 hrs according to the manufacturer and they seem to be on par with the claim. The charge time is quite long and for those used to quick charge may find this annoying but it’s not really an issue if only used twice a day for example, In the mornings or in the evenings when commuting to work,doing your fitness exercise or both you will see a day easily and just charge overnight.

For me these are not the typical kind of headphones I wear but they do a good job at their price point and for the added safety feature with the LED strip on board they give you that bit more for your money and also keeping you visible in the early hours or late evenings which for me is an invaluable feature not seen to often. They are also comfortable but will take a few minutes to get used to plus there is additional extra buds included which is nice to see.

These can be purchased from Tesco,Argos, and at www.groov-e.co.uk  They cost around £30 -£40 depending on where you shop and they fall in par with similar offering available but giving you that added LED safety aspect thrown in.