Portable power on a keychain. Say hello to THINO by @VIGLONEW Now on @Indiegogo 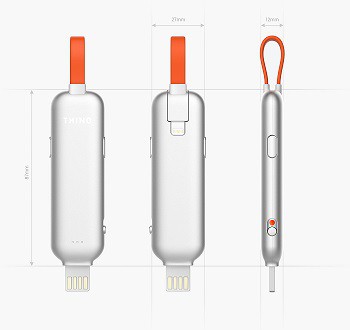 There has been a large array of portable charging ideas popping up of late and with the vast amount of ideas growing it shows that we still have an issue with battery anxiety,well most of us..Even though mobile phones batteries are getting bigger this does not entirely solve the matter,In most cases bigger batteries mean the device has bigger screen. The market now for portable charging is becoming very competitive too and the options available are quite good and some not so good and there is an element of style over substance attached.

Thino is a little different,it looks good its compact and its light,also it does not have masses of power but its designed for the emergency situation rather than the longevity of battery until you meet your next power point.Having said that it looks neat,is neat and its convenient,convenience wins for the consumer,its small,not bulky so it wont take up space anywhere unlike some alternatives.

Thino will come in different options to so you can pick,they support Micro-USB devices such as Android and Windows Phone and of course a lightning connector for the iPhone 5 and above.

Thino has a short cable which has a locking mechanism attached to it too so it aint one of those long annoying ones that get tangled easily and can be attached to your keychain or where you may decide yourself,there is a Turbo mode also built in to speed up charging which is handy and the internal battery provides 480 mAh which would get most people out of a mess..

While most ordinary chargers are set to supply a specific current, THINO is able to detect exactly how much current your device can draw from the power source and supply it with its maximum intake by using a built-in Micro-Processing Unit (MPU).