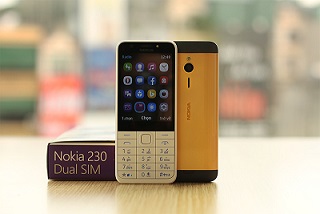 There is several companies whom we have mentioned here before that can offer a gold-plating service for your mobile devices,People who get it done usually are real enthusiasts ,have nothing else to do with their money or just want something different than anyone else and there is no harm in that at all…

Karalux are now offering the service for the Nokia 230 which is not the norm to get gold-plating done,typically this would apply to high end devices or niche devices,the 230 is a low end entry model which costs little to begin with and the process here will cost you more than the device itself..

It takes from 3 to 4 continuously working hours to complete a gold-plated Nokia 230. Like other Smartphones, after being gilded, Karalux engineers coat a layer outside to protect its gold surface against wearing and scratching.