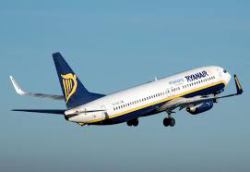 Ryanair ,the no frills airline is said to bring passengers some inflight entertainment and Wifi this year by way of trials,since other airlines are already offering these services this does look bad on the company regardless especially in todays world when the technology is available and i’m sure with a fleet as huge as Mr O Learys this could be made affordable at best,we have seen some airlines charge people silly money for using Wi-Fi on board their planes but now in a tech driven world this could easily become a sustainable extra for passengers..

While Ryanair has long been synonymous with levying extra charges for services offered free on more established airlines, it says it may offer both of the new services for free, Chief Technology Officer John Hurley told journalists on Tuesday.

Improvements to its much maligned customer service has helped the airline boost ticket fares and increase passenger numbers by 10 percent this year and sent its share price to an all-time high last week.

Ryanair, which made a failed attempt to rent out inflight entertainment devices a decade ago, will try again with a system that streams films and television shows to customers smartphones and laptops on flights to holiday destinations this summer.

The service, launched by several U.S. airlines recently, may be offered free of charge, subsidized by advertisements for companies operating in the destination city, Hurley said.

Wifi will likely be trialed later this year on routes frequented by business travelers, a key focus for the airline which launched a flexible business ticket last year.

Pricing has not yet been decided, but light use for emails may be free, while heavier usage would be more expensive, he said. The service is unlikely to be offered on all planes.