Samsung announces the A7 and its got metal on it. #Samsung #A7 by jimboireland 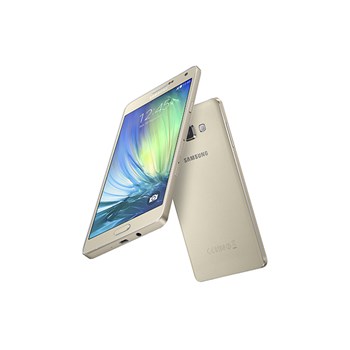 Samsung have been know now for a long time to sport plastic bodies which has over time became increasingly boring and fans also got bored and fed up with this,recently they have tried to change this with devices such as the Galaxy Alpha which is now been shelved and the Galaxy Note 4 which is a powerhouse,sadly the Note Edge did not live up to the Note 4 being housed in plastic which of course probably kept its high price down but still its a powerhouse and looks great and i’ve enjoyed it the last while along with the Note 4 but the Edge wins my vote.

The Galaxy A7 is equipped with a multicore processor combining two separate quad core processors, enabling users to quickly and easily perform data intensive tasks. The Galaxy A7 has 16GB of memory and 2GB of RAM to power all of a user’s favorite apps and media, and is supported by a long-lasting 2,600mAh battery.7

The Galaxy A7 also supports the intuitive features and services offered by the Galaxy A5 and A3, with an advanced 5 Megapixel front-facing camera and advanced selfie features including ‘Ultra Wide Shot’ and ‘Auto Selfie’ modes, which make it possible to take a photograph using only a voice command or even a simple wave of the hand. The device also features ‘Always Clear Voice Auto Control’ to reduce noise from the surrounding environment, as well as LTE Category 4 support for quick and easy photo and video uploads on any social network. In addition to these features, the Galaxy A7 offers a Private Mode, which adds an extra layer of security for important files and documents. The A7 also has Multi Screen app function capability.

Prices have not been announced nor a release date so this will be another key feature here,the Alpha was highly priced here and has not sold too well as people opted for the S5 instead,will you get one??