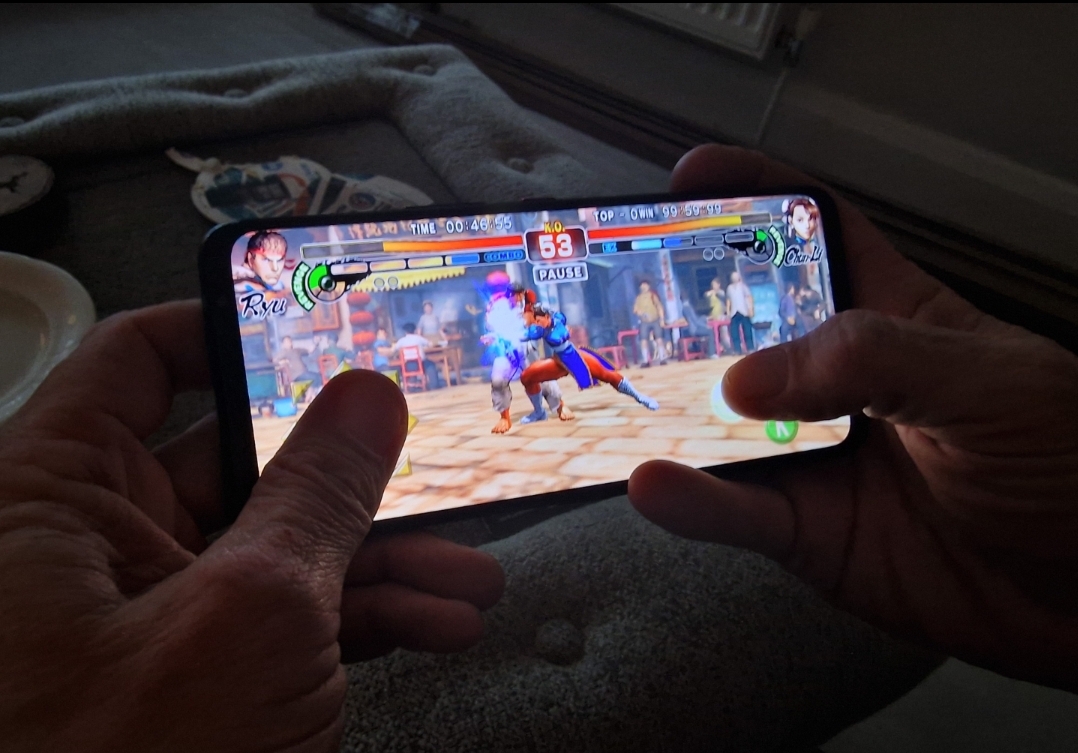 The Asus ROG 5s phone is a bit of a beast it must be said. Given it is aimed at gamers it also has great battery life and an excellent camera with great speakers too and a great display.

The phone is not light and not small by any means either which is fine with me however the back of the phone is slippy and can move on a table etc if it starts vibrating. I like phones like this aside the slippy part as you can feel the phone feel the quality and feel it in your pocket, having this alongside other devices I own it is the biggest and heaviest but again I am fine with this because it looks good and is a powerhouse too.

The camera hump is raised but nothing like some others out there which are starting to look stupid now and its angular design blends in well on the device too but it does rock on a table if typing so a case would be a good idea to eliminate this and also protect the device.

On the right you have your power on/off and volume keys on the left you have a docking point, on the bottom you have a headphone jack, yes you heard me right and you also have your USB-C port and a mic.Up to there is just a mic so it is a clean looking device overall and feels solid in the hands and you know you are not holding something cheap.Also as it is a gamer phone you have Air Triggers built in.

The gaming and user experience

If you are into mobile gaming this is what you could look into, not a huge mobile gamer myself but once was and this phone not only caters for that well it caters for everyday use too, the 6.78 inch screen is ideal for media consumption and more with a peak brightness of 1200 nits and that 144 hz screen refresh which seem to be the buzzword of late, in short here a superb display.

To top of the visual aspects you also get the audio goodness thrown in with dual speakers that are loud and as good as my iPhone 13 pro which are seen as one of the best speakers on a phone today, both the sound and picture just make it a really good experience for anyone to use as just a normal phone as well as gaming.

For my daily use it walked through anything with ease so that emails, social, browsing, and all the daily tasks I use my phone for but the thing is it doesn’t stop there it is also super when it comes to gaming, typical gaming phones I have seen from other manufacturers skimp out somewhere but not this phone.

The camera set up here is also typical of a gaming phone a 64mp main camera 13mp wide and 5mp macro and a 24mp front facing camera, you can shoot up to 8k in video here but there is no point just yet in doing so as where can you watch it? This wont be mainstream for another 2 years at least and then think of those large files too if using 8k but the fact that it is there those fe who have 8K tv and has tech than 8K capabilities can enjoy now. The cameras are good in my eyes given it is not the main feature of the phone and who it is aimed at you can take great photos and videos but check them out for yourself below.

We shot in 4K on this phone as I felt it was the best thing to do to a wider audience but we can upload 8K video if requested.

We have done both night and daytime sample videos and photos here so you can get some context.

Overall this phone is ideal for those who want it all, which is gaming audio camera power and more it is a solid phone not lacking where others do.