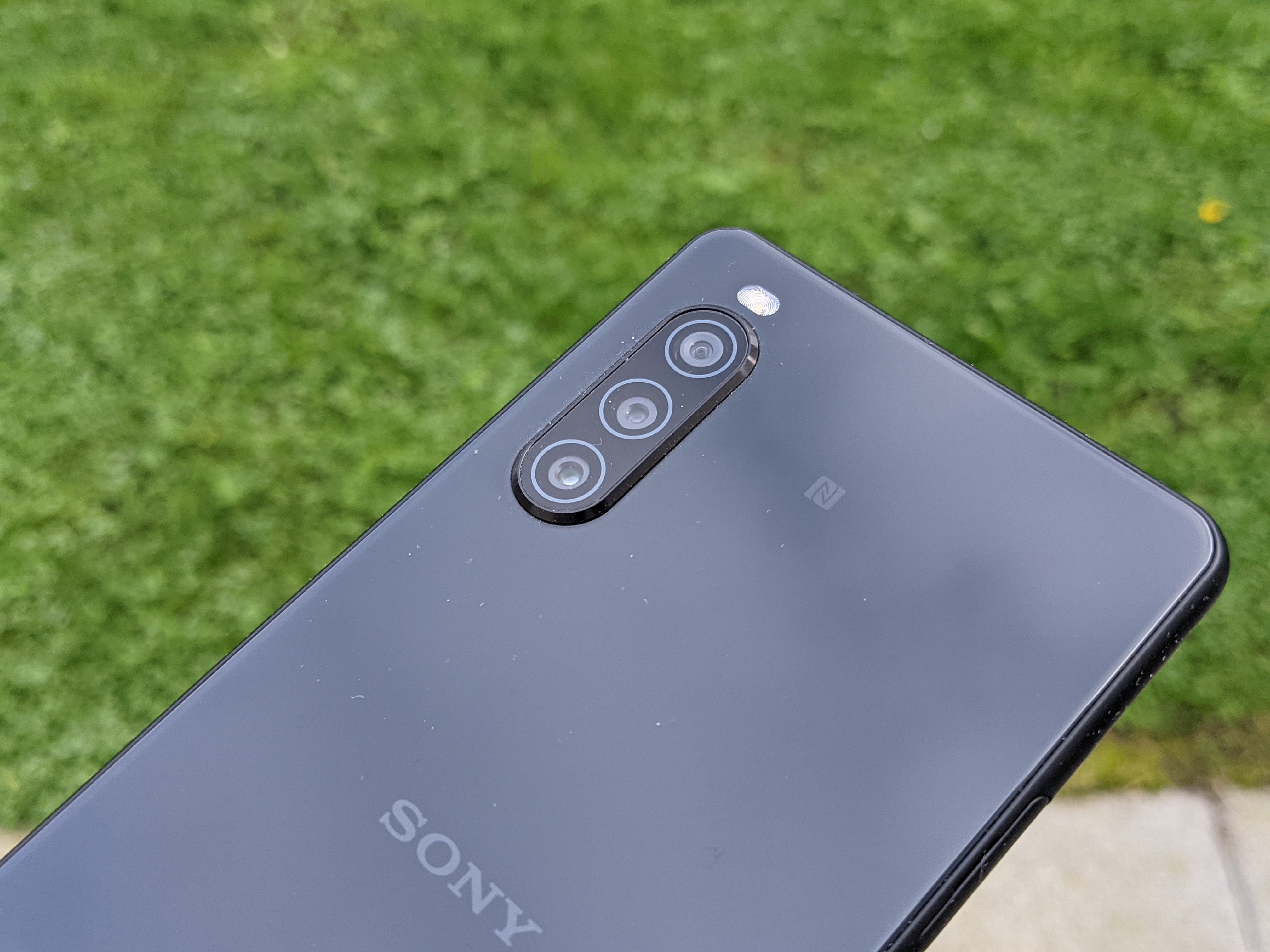 Having both reviewed the Xperia 10 last year myself and Liam Burke have been looking forward  to seeing what improvements Sony have made over its predecessor the Sony Xperia 10 ii. Today Liam and I collaborate and share our opinions on the device and Liam will talk about it below whilst I go through it in video format.

Its approximately the same dimensions as the Xperia 10 but the weight is 11grams lighter and you can definitely feel how light the phone feels when you hold it. The screen is now an OLED and protection has been bumped up to Corning Gorilla Glass 6.

An upgraded processor and more internal storage and memory is added but the two biggest jumps is with the camera going from a dual lens to a triple lens setup and the battery now has gotten a big increase from 2870 mAh to 3600 mAh.

When you hold the phone it feels extremely well built from the aluminium frame to the Corning Gorilla Glass 6 on the front and rear of the phone and its IP65/68 certification so its water resistant for up to 30 minutes (in 1.5m of fresh water) and also dustproof. And having the 21:9 screen ratio makes the phone more slender in your hand so its a lot easier to hold than other wider 6’’ screen phones.

The rear is very slippy and the triple camera lenses stick out a bit so you definitely would want to have the phone in a case to protect it. The side mounted fingerprint sensor was always very accurate for me and having it on the side of a phone is very natural way to unlock the phone its a pity face unlock was not included. Above the fingerprint sensor is the volume rocker or in the camera app it can be used to zoom.

The 3.5mm headphone jack is at the top of the phone along with one of the phones microphones.

On the top bezel there is an earpiece, a front facing camera and a notification led, which is very handy to have so you dont need to unlock your phone to see if you have a notification. On the bottom bezel is the forward facing mono speaker, while at the bottom of the phone has the USB-C connection and the other microphone. In the box you get a quick start guide, Basic Sony Earphones (MH410c), USB-C cable and Quick charger UCH-20 High Power Fast Charger.

The Xperia 10 ii runs Android 10 and I found it very snappy when switching between applications thats due to the Qualcomm Snapdragon 665 CPU and the 4GB ROM. Sony have not added too much bloatware and the apps that Sony added can be uninstalled.   The launcher is nice and clean. Sony have again added the side sense feature which gives you a quick shortcut to other apps it seems to work a bit better on the Xperia 10 ii than other Xperia’s. Sliding up will enable the Multi-Window Mode which is very handy for using two apps simultaneously, you can also enable it on the lock screen or enable One-handed mode.

I was very impressed with the 6.0 FHD+ OLED screen of the Xperia 10 ii the colours were bright and vibrant and the videos were sharp even in bright daylight the screen was visible watching content in 21:9 was an added bonus.

The triple rear camera in the Xperia 10 ii setup  is

The Camera App is the standard Sony one and the default mode that uses Sony AI to figure out what the scene is of the photo that your taking gets it right very quick. There’s also other modes like Night mode, Google Lens, Panorama , Manual, Slow Motion and Creative effect which uses a live filter in your photos.

As can be seen from the photos the Xperia 10 ii did a good job at taking pictures and matching the actual colours of objects and didn’t over saturate them and in low light conditions the pictures remained sharp.

Again the front selfie camera is a 8 MP, f/2.0, 24mm (wide), 1/4.0″ with a 84 Degree Field of View. In low light it will use the screen as a Flash, HDR (High Dynamic Range) photo Portrait Selfie, Automatically takes your pictures when your Smile or you can wave at the camera to take a photo and again there is also a Manual mode, if you want to tweak the camera settings yourself.

There’s plenty of options in Portrait mode you can soften your skin tone, add a Bokeh effect, change your skin brightness, make your eyes lager and add a slender effect to your face.

The Battery life on the Xperia 10 ii is excellent, Sony always know how to maximise the battery of their phones. And if your battery does go low Fast charging 18W  is supported, as is Fast Charge 3.0 and USB  Power Delivery.                    Sony also make use of  their Xperia Adaptive Charging which monitors the phone as it charges to make sure the battery isn’t overworked. Which is important as we keep our phones for longer and the better the battery is maintentained the longer it will last for you.

Sony’s new Xperia 10 is definitely something new from them it has their new “cinematic” 21:9 6’’ inch display which is aimed at multi-tasking and viewing video. It’s a long tall phone and Sony have slimmed down the bottom bezel so there is quiet a lot of that 21:9 cinema screen in the phone. Its great value for money for a mid-range device.

It’s a bit of an unusual shape to hold in the hand as its more narrower than current phones and taller but after a few days of use you do become accustomed to it. Making a welcome return from previous Sony phones is the side-mounted fingerprint sensor which I found very ergonomic to be able to unlock the phone with my thumb also on the side of the phone is a separate power button and a volume rocker.

On top you find the headphone jack and one of two microphones, on the side is a flap which covers the nano sim tray and also a microsd tray (Supports up to 512GB). And on the bottom is the now standard USB-C connection and the mono speaker. The rear surface is a metal surface with led flash and the dual camera lens just a millimetre raised above it.

The screen is the main item that sets the Xperia 10 apart from the competition is its 6’’ Full HD+ LCD but with the ultra-widescreen aspect ratio 21:9 the ultra wide display is certainly different. Sony has commented that as more and more content is being shot in that ratio  (nearly 70% of new Netflix and Amazon Prime) so you will get the full effect of it with its 21:9 display. When viewing new content from Netflix its great not to have the any of the screen wasted also as it’s a HD+ screen I found it gave plenty of detail and videos looked sharp. Using the outside in sunlight the screen was quiet readable. The screen is made with Corning Gorilla Glass 5 so it should withstand drops and scratches.

As there’s a headphone jack on the phone you can use your own wired headphones and if they have in-line controls that worked for me without any problem. Also included is an FM Radio it preformed quiet well but it will need headphones plugged into the phone as it uses them as the FM antenna. The Xperia 10 only has one music speaker it performed reasonably as Sony have added High-Res Audio.

The camera setup is a dual 13 Mega Pixel (1/3.0 sensor size, Pixel Pitch 1.12 μm, F2.0 Lens) and a 5 Mega Pixel (1/4.0 sensor size, Pixel Pitch 1.4 μm, F2.4 Lens) The updated camera app is very quick to launch and the layout of the settings is clear and easy to understand. In daylight conditions it took decent shots and while zooming the pictures didn’t introduce too much noise also included are modes Bokeh, Portrait Selfie which is an artistic selfie with Bokeh included with other face effects , Panorama and a Manual setting which allows you to tweak the photo settings to your personal tastes, for most of my pictures I let the Auto mode chose which were the correct settings to use. 5 x Zoom is quiet good with the dual camera setup. In indoor conditions with less light I did find the pictures were a bit grainy.

Video records in 4K and while outside videos shot in daylight recorded in good quality I found indoor videos with less light to be a little grainy the colouring to be slightly off the actual colours and zooming does introduce some loss of detail.

120fps Slow Motion Video is also a nice video recording feature. The front camera in outside light took good quality pictures while inside in dark conditions it took decent selfies as uses a screen flash. Front video records in Full HD it also has Sony’s Steadyshot feature for videos recording so they aren’t too bumpy.

The battery capacity in the Xperia 10 is good sized 2870mAh. Some battery features are “Battery care” which learns your battery charging habits and adapts how the phone charges again this helps increase the lifespan of the battery.

Smart stamina and Stamina mode are also included which you can enable to restrict some background activity and increase your battery life, and if you need it there is an Ultra Stamina Mode which enables only a few apps like phone and camera to giving you an extra long battery life. I found the battery able to handle a day of heavy use no problem.

The Xperia 10 runs Android Pie out of the box Sony uses it own lightly skinned version of Android  the updated homescreen app is a bit of mix of iOS and android with the swipe up gesture to see your running apps. As the phones runs the Qualcomm Snapdragon 630 processor with 3GB RAM its quiet fast and overall the phone was quiet responsive.

Internal memory is 64GB so you may need a memory card as installed apps (of which there isn’t too many) took up 16GB. Also included is the Side sense feature which allows you to select a part of the screen to bring up shortcuts, I found this feature a bit of a hit-or-miss. Split Screen feature is a feature that all Google apps like YouTube, Chrome, Messaging, Phone etc allow you to split the screen in two so the top part of the screen can be one app like YouTube and the lower part can have another app open like Chrome.