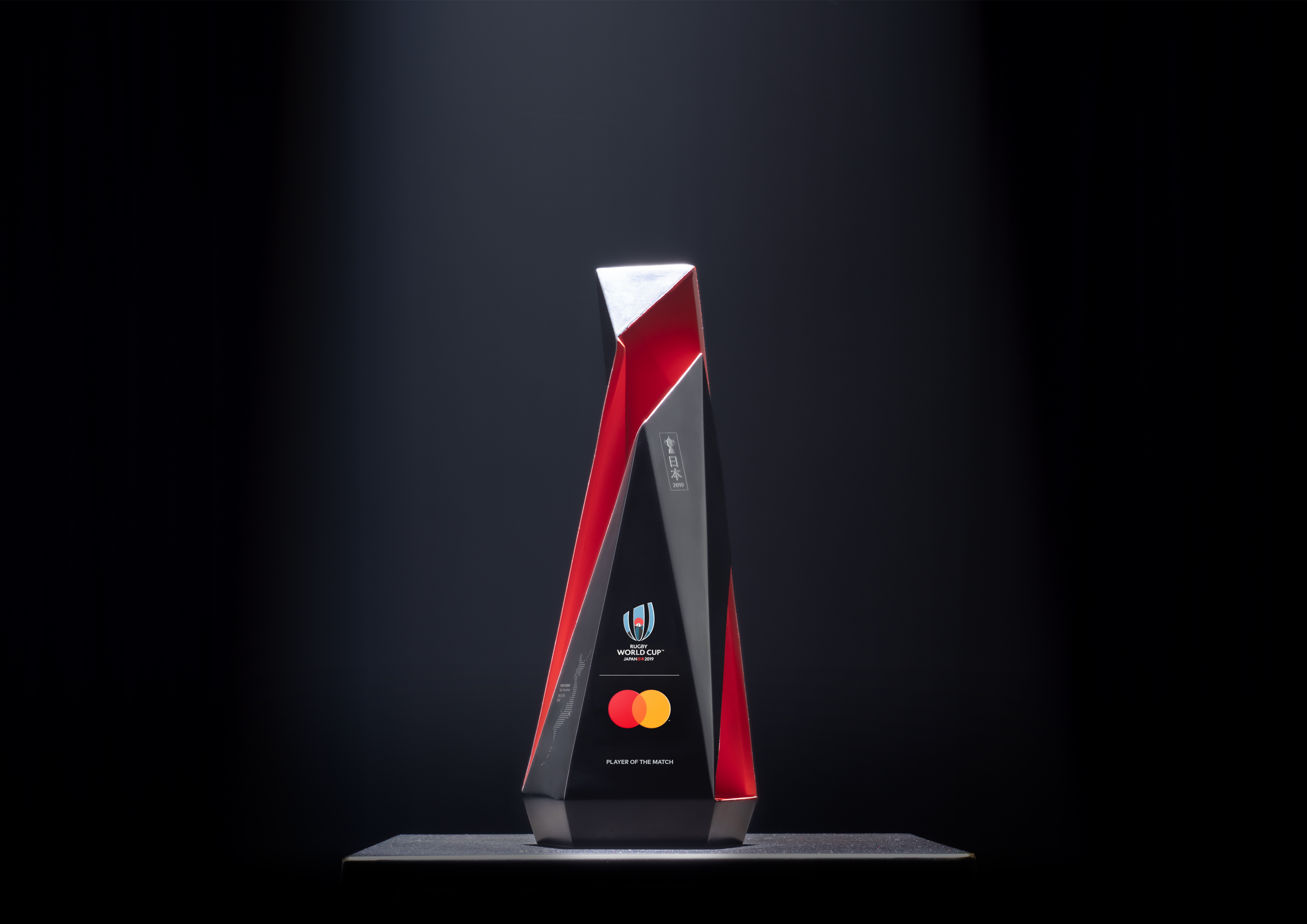 As Rugby World Cup 2019 kicks off, worldwide partner Mastercard is celebrating the inclusive spirit and innovation that makes rugby a uniting force for fans and players around the world.

“Connecting with people through their passions is at the heart of how we bring Priceless to life all over the world,” said Raja Rajamannar, Mastercard Chief Marketing and Communications Officer. “Sports have been an important part of that journey, and by using technology to enhance the experience for fans at the game, fans at home and players alike is how we are building emotional and culturally-relevant connections.”

The hardware features a sculptural origami design, inspired by the work of Professor Jun Mitani, and will be finished live on the ground with in-the-moment laser etching reflecting highlights from the match. Monitoring fan activity on social media through a bespoke API – combined with commentary from the official worldfeed RWC 2019™  – Mastercard will select the top moments of each match to be immortalised on the trophy.

This unique storymaking approach enables players to take home a first-of-its-kind, truly priceless account of the match, so they can re-live moments of passion, excitement and sporting greatness.

Nicola Grant, Head of Marketing and Communications, UK, Ireland, Nordics and Baltics at Mastercard commented “as a Worldwide Partner for Rugby World Cup 2019™, we are excited to bring rugby fans closer to their passion through Priceless experiences. Advancements in technology over the years means that no epic or nail biting moments will be missed, whether you take part in the tournament in Japan or in Ireland. We are thrilled to be in the thick of the action in Japan, celebrating the first-ever Rugby World Cup™ in Asia.”

Technology Leaves Its Mark on the Field…

In a recent survey* of sports fans, several impacts of technology were highlighted as improving the overall experience, both in-stadium and at home with a whopping 82% of Irish fans agreeing that technology is enhancing sports events. Video replay came out as a fan favourite, with over half (54%) of all global respondents saying it was significantly improving sport. 63% of Irish respondents also agreed that social media allowed them to be more conncted with their favourite players, teams and the game.

Current Elite IRFU Rugby Referee Joy Neville said “the game has evolved for both the players and the officials, which as a result can provide more information for all involved whilst creating more entertainment for the supporters. These technological advancements can provide data which can provide very useful metrics to facilitate assessing performances, during competition and in training. This information can be analysed to help players and referees to identify areas in their performances that can be improved.”

English and Irish fans have varying opinions when it comes to tech. Those in Ireland are big fans of video replay (60%), whilst nearly half (44%) of respondents in the UK voted for hawk-eye and video referring (41%). Regardless of geography, fans are united in a love for sports on the go, with a majority of both nations saying keeping up to date on their phones makes them feel more connected and 29% of fans keep up-to-date online via video streaming.

South African rugby legend Bryan Habana agrees that “referring certain on field instances to the” TMO (Television Match Official) “has been crucial in making important, game changing decisions. We are seeing more of the correct decisions being made when instances of TMO involvement is introduced.”

…And Keeps Fans Close to the Game

Technology has also played a role in how fans stay connected to the sport. New Zealand (38%) and Australia (22%) represent the largest populations watching a match live on television at least twice a week. Meanwhile, in continental Europe, French and Italians are united in their favorite motivational emoji, both loving the hand clap when tweeting about sport (22% and 23% respectively), whilst nearly a fifth of the UK (17%) use the thumbs up emoji to celebrate online.

Bringing the Experience to the Fans

In addition to Dan Carter and Bryan Habana, Mastercard is working with Joy Neville, Michael Leitch and Akihito Yamada as global ambassadors for Rugby World Cup 2019TM in Japan to bring fans closer to the games and sport they love.

Dan Carter, Mastercard ambassador commented “being hosted in a country like Japan is something very unique and different as well. Looking at Japan currently, I’ve seen how much rugby is growing and how excited they are to be hosting the first Rugby World Cup TM in Asia – so it’s an exciting time of the year. Being a Mastercard ambassador for Rugby World Cup 2019 TM in Japan is a great experience. I got to experience it in London 2015 and do some amazing work around the Rugby World Cup TM and to be an ambassador again, it’s a lot of Priceless moments for me and also for people going to watch the games.”

This year, Mastercard will host its first-ever Priceless Surprise Twitter thread, a priceless chain of unexpected moments in unexpected places with unsuspecting people during the opening weekend of Rugby World Cup 2019TM. Fans can be a part of the experience by following Mastercard global ambassadors @DanCarter and @BryanHabana, @mastercard and #PricelessSurprise on Twitter.