The Nokia 9 Pureview has been on sale some months now but reports on how it performs have varied over the last few months which has been somewhat a moot point for HMD and there is no real sales data available yet, One thing which reminiscent of Microsoft of old and the Lumia days is where the said devices are available (region specific) or staggered launches which for Microsoft did not bode well and the same applies here too.

If you are in Ireland you have to resort to their store as no carrier has the device,this also applied to the Nokia 8 sirocco which can be picked up for peanuts being the flagship of last years portfolio of handsets and again this annoyed people greatly as to why no carriers had the device nor third party sellers here in Ireland stocked them such as Harvey Norman,Littlewoods or Argos. 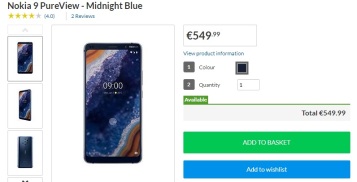 Today though you can now pick up the Nokia 9 Pureview for €549.99 with either Littlewoods or Argos which seem to be competing with prices, I keep a close eye on these two with prices and Littlewoods are in most cases overpriced at launch in Particular where we seen the Nokia 9 priced at €769.

Littlewoods this time around have not showed off their previous prices as they do normally touting huge savings but as I said i have all their prices catalogued I also have called them out several times in the past over how they manage to find their prices and another example here of the Nokia 8 sirocco..

So if you have not picked one up yet and wanted the price to drop this is a good chance at a decent price..How long these stay discounted is anyone’s guess and again the availability factor is at play here as it was slated as a limited device,some online stores have already pegged the 8 sirocco as discontinued. Argos/Littlewoods UK have the same offer.