Concept Cars That Should’ve Made It to Production Modernised. #Motoring #Concepts 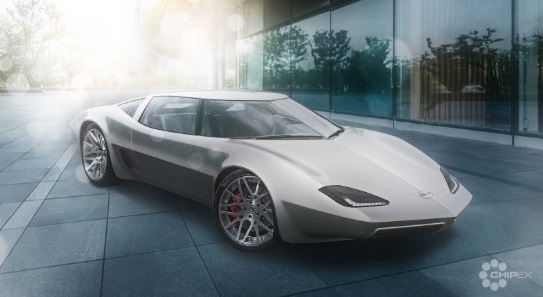 There have been many concept cars in automotive history that all car fan can only wish had been made. Concept cars are often among the most important debuts at auto shows because their shape or technology can give the public a glimpse at what a company plans to put on the road in the near future. Unfortunately, the gorgeous concept cars simply fade away, and never make it onto the roads.

These classic concepts have been updated by car care products specialist, Chipex into modern supercars.

We’ll start with the 1977 Chevrolet Aerovette. Built from the mid-engine ‘Vette prototypes of famous Corvette engineer Zora Arkus-Duntov, The Aerovette had the same mid-engine configuration but had a 6.6-L V8 instead of a smaller Wankel rotary engine.

The mid-engined Chevrolet Corvette is big news today, but the idea of putting the powerplant behind the ‘Vette’s driver goes back decades. By the time the Aerovette concept debuted in 1976, multiple experimental vehicles imagined how the layout might look.

The basic shape for the Aerovette arrived in 1973, and this original version packed a four-rotor Wankel rotary engine. The company then reworked the machine for a 6.555-liter (400-cubic-inch) V8 to fit under the rear deck. The General gave it a tour of car shows in 1976, and the automaker even considered using the concept as the basis for the fourth-gen ‘Vette, according to Hemmings.

This modernized take on the look largely retains the Aerovette’s design except for replacing the original popup headlights with fixed LED lamps for illumination.

Next we have the 1967 Lamborghini Marzal. Back in the ‘60s, Lamborghini had the odd desire to build more family-friendly vehicles, and the 4-seater Marzal concept was one of them. It came with a 2.0-L 6-cylinder engine that was actually a 4.0-L V12 cut in half. The original Lamborghini Marzal debuted at the 1967 Geneva Motor Show. It featured a body by Bertone, specifically from the pen of famous designer Marcello Gandini. Its weirdest feature was a pair of massive gullwing doors for accessing the front and rear seats. Glass occupied nearly the entire panel, which created an eye-catching appearance in profile.

You can see the updated Marzal has a body style more in common with a Gallardo. It retains the clear glass gullwing doors but adopts modern LED lights and current-style Lamborghini wheels. For this modern effort, the artists use the sleek shape of modern Lambos but adapt the weird doors into the sides. There’s room for four inside.

The 1971 Mazda RX500 initially debuted at the 1970 Tokyo Auto Show and was the company’s effort at imagining a rotary-powered supercar. Its 1.0-liter, two-rotor engine made a claimed 247 horsepower (184 kilowatts). Plastic body panels kept the weight down to around 1,874 pounds (850 kilograms). The 2-door, mid-engine, rear-wheel-drive sports car had an oddly rear-heavy shape but a sleek design that made it look like an estate car turned into an LMP1 racer.

It’s hard to improve upon greatness, so the modernized take looks similar to the original though it comes with a more modern set of wheels and lime green paint and an even more streamlined shape that shares language more with longtail Lamborghini than Mazda.

Finally, we end on a 1969 BMW 2800 Spicup. The name Spicup comes from the concept being intended as a split between a Spider and a Coupe, which mostly meant that the middle section of the roof was sheared off.

Like the Lamborghini Marzal, the 1969 BMW 2800 Spicup has a body from Marcello Gandini’s time at Bertone. The name was a combination of spider and coupe as a nod to the removable roof panel that allowed for the conversion between the hardtop and open-air motoring. The front of the vehicle had very similar styling to what Gandini used on the 1967 concept that became the Alfa Romeo Montreal, but he reworked the shape for BMW by incorporating a shaker hood. At the back, there was an angular trunk behind the rear glass.

The modern take incorporates a nose similar to the i8 and modern LED headlights. The bulge in the hood is a little bigger, too. Otherwise, the design here looks a lot like the original. Modernizing this grand tourer involves the traditional BMW kidney bean grille, larger wheels, a new shaker hood, and LED lighting. But even today, the overall look of the Spicup would probably do well, so the overall shape wasn’t altered all that much.