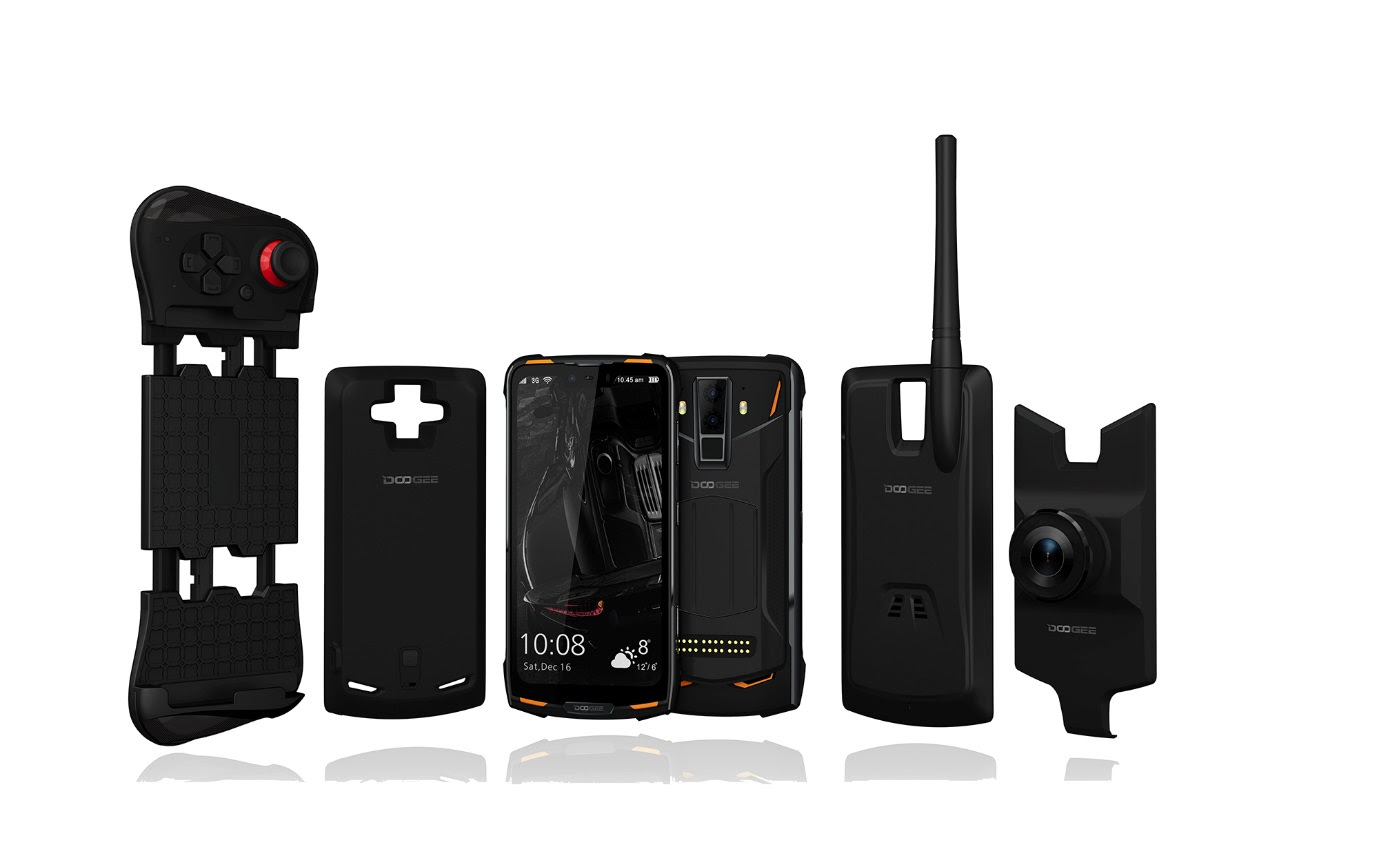 Innovative technology company, DOOGEE Hengtong Technology Co. Ltd, has just announced the launch of the latest rugged phone in its S-Series range, the DOOGEE S90. The S90 is the first ever rugged modular smartphone which allows users to mix, match and swap parts by sliding them into place using the magnetic metal point design. The S90 will be available at a discounted rate of $299 (£234 approx.) for the phone only or $399 (£312 approx.) (including night vision, battery and intercom modules) to backers on Kickstarter from 15th January until the 25th February and immediately after on the DOOGEE website for $499 (£390 approx.) or $676 (£530 approx.) including the modules.

The S90 surpasses other phones on the market with its innovative modular design. Using magnetic force and 24 metal points to exchange data located on the rear of the phone, users can instantly turn the S90 into a powerful night vision camera. It also doubles as a professional rugged walkie-talkie with 400-480MHz wide range and long distance efficiency and a portable game console. In addition, the 5000mAh power bank module delivers an impressive 26 hours of usage.

Toughest smartphone inside and out

In addition to its new modular design innovation, S90 is the best rugged phone DOOGEE has produced to date. It is waterproof, dustproof and shockproof with IP68 protection and is fully functional when submerged in water up to 1.5m (5 feet) for two weeks. Thanks to its combination of metal and polycarbonate, the S90 can survive extreme temperatures, drops, transport shocks, humidity, mould, salt spray corrosion, explosive gas, vibration and much more. No matter where users take the S90, it can handle it.

Running on Android 8.1 Oreo system and driven by a balanced eight-core Helio P60 Octa-core chipset and Mali-G72 MP3 GPU, the S90 is up to 25% more energy efficient than previous models with a 30% CPU operating boost. The S90 is powered by a multi-core AI processing unit and NeuroPilot AI technology and can pick-up user behaviours, has facial recognition, fingerprint unlocking, scene identification as well as more advanced features. In addition, the S90 comes with 6GB of RAM and 128GB of built-in storage and a microSD card slot, allowing up to up to 256GB extra memory. This, together with the MaliG72 MP3 video adaptor, ensures the S90 functions smoothly during resource-intensive gaming or graphic applications.

The screen has an aspect ratio of 18:9 and 6.18’’ full HD+ display resolution of 2160×1080 pixels to produce a bright and contrasting picture. It also houses 16+8MP dual rear AI cameras, acting as a smart photographer, as it intelligently learns from facial recognition and scene identification in order to adjust light and tone. The device offers a multi-frame function, noise reduction, depth of field recognition and various filters to ensure the best photo possible is taken.

The 8MP SONY front camera with f/2.0 big aperture and 90°super wide-angle means every selfie captured is soft and flattering and AI-driven beauty function highlights the contours of the face to deliver the most attractive portrait.

The 5050mAh Polymer battery has a power saving system and has 675 hours standby time with the support of 10W wireless charging. The large battery capacity and rapid charging speed ensures you are never out of power for long.

DOOGEE is also developing a brand-new 5G module that can be applied to the S90 smartphone, making the network speed 10 times faster, which will be launched in Q3 of 2019.

The Kickstarter campaign is live now until the 25th February.