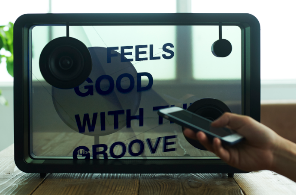 Japanese designed speaker is a world first, displaying animated lyrics on a translucent screen in time with the music ,The Cotodama Lyric speaker from Japan finds the lyrics of pretty much any song and adapts the way it shows them, depending on the type of song, in time to the music on screen. No two songs are the same in the way they are presented.

As the world’s first visualiser speaker, the Lyric speaker has won a handful of notable awards such as Best Bootstrap Company Award at 2015 SXSW Interactive Festival’s 7th annual SXSW Accelerator Competition, Japan’s Ministry of Economy, Trade and Industry 2015 Innovative Technologies Award and Japan’s 2016 Good Design Award. Since launching in Japan in November, 2016, the Lyric speaker has been gaining a high reputation from domestic audiences.

The Lyric Speaker is a next generation audio speaker that truly takes audiences back to the essence of song lyrics. The speaker contains a new technology called “Lyric Sync Technology”, which generates specific fonts and motions to match with the music. This system allows the speaker to utilise its translucent screen for showing the lyrics automatically with an effect like a hologram. Applying those features, COTODAMA have successfully created the Lyric speaker to let people fully immerse themselves in their favourite music.

Many people may have been singing the wrong words for years or have wondered what exactly Eminem says in his raps. Now people can actually view and correctly learn the lyrics to avoid those embarrassing blunders. The Lyric speaker, by linking with SyncPower Corporation (PetitLyrics), Japan’s largest lyrics database, recognises a song, analyses the mood and its “expression engine” and chooses fonts and animations accordingly so people can see the lyrics as the artist actually sings them.

If a slower or love song is chosen, the Lyric speaker will react and show a more delicate font that drifts across the speaker. If no lyrics are found, or an instrumental song is played, the speaker shows abstract graphics that animate in sync with the music.

The Lyric Speaker uses WI-FI to connect to the free app which is compatible with Spotify, Apple Music, Deezer, Google Play, SoundCloud, Youtube, and other services. The speaker can play 96khz/24bit FLAC files, has a range of 40Hz to 40kHz, and has two coaxial loudspeakers and two drone cones.

·  Song lyrics show up on translucent screen via Wi-Fi

·   The speaker analyses the songs mood and structure and defines specific fonts and motions to match with the music.

·   The speaker has variety fonts and motions.

Jin Saito, CEO of COTODAMA and Creative Director of Six Inc, comments, “The evolution of music technology has been developing so rapidly but what about lyrics? Even though lyrics play a crucial role in music composition, I felt there was an opportunity to develop and enhance lyrics using cutting edge technology.

I believe music impacts hugely on people’s mind; it cheers you up when you are down or can get you in the mood for a big night out. Lyrics are one of the key elements that enable music to change emotions. I hope that more people can enjoy the power of lyrics and learn and appreciate more about their favourite songs through the Lyric speaker.”

Saito continued, “In Japan, there is a culture of appreciating words themselves as art such as Shodo (calligraphy) and decorating your favourite words with Kakejiku (hanging scroll).Through making the Lyric speaker’s visuals with the artists and the programmers, we have strived to put Japanese aesthetics into our product and contribute to the world’s music industry.”

The COTODAMA Lyric Speaker is available from https://lyric-speaker.com/en/   for £4,320 and $4,500 Please click “add to cart” on the website to find the distributor in Europe or USA