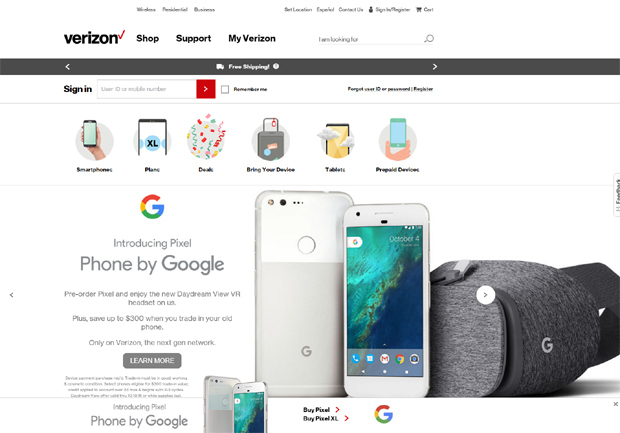 If something is well known within the smartphone community (at least to those  who frequent these kind of sites) is that having a carrier version of your phone involves two things: 1) Financing and 2) Slower (or sometimes forgotten) updates

Verizon Wireless, one of the four major carries in the US is well known for the latter, and when they announced it will be “Exclusive” to them some of us freak out a bit, but today we are getting great news.

“First and foremost, all operating system and security updates to the Pixel devices will happen in partnership with Google. In other words, when Google releases an update, Verizon phones will receive the same update at the same time (much like iOS updates). Verizon will not stand in the way of any major updates and users will get all updates at the same time as Google.

Also, the Verizon version of the Google Pixel is carrier unlocked, so you can use it where ever you like. Finally, we have three apps pre-installed on the phone Go90, My Verizon (which is your account management tool) and Verizon Messages (your messaging app). As you noted, all three can easily be uninstalled by the user.”

A Verizon spokenperson told Ars Technica this. And what it means, is that the only difference you’ll find between this and the one sold throug Google page will be the extra name at the back.

Something not seen before but a good move if you consider the fact, that being able to use it with AT&T or T-Mobile simply means a difficult time for Verizon on updating the phone.

Google also talked about it and said:

“OS updates and monthly security patches will be updated on all Pixel devices (Verizon and non-Verizon versions) simultaneously.”

Still remains  to be seen how much of this is totally true, but we’ll keep an eye on it.

What do you think? Will this make you pre-order your on the bid red instead? Let us know in the comment section below

Explore the Flora and Fauna of your county with Google Lens. #GoogleLens #Ireland