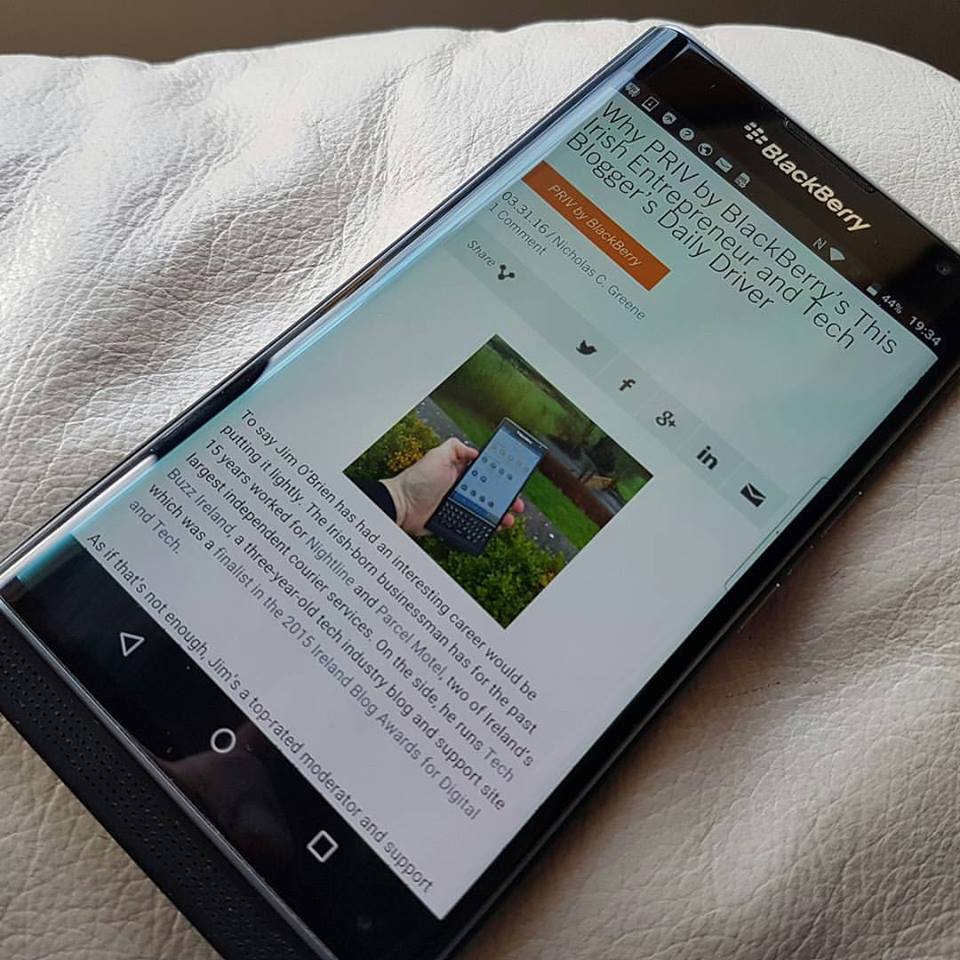 At the beginning of the week, Blackberry gave us awesome news. The update to Android 6.0 Marshmallow for the BB PRIV was ready and was starting to roll out globally.

Us here at TechBuzzIreland are big fans of the PRIV and you can see why HERE, also you can see our full review HERE.

This is quite impressive as the blackberry team just started the beta testing for it less than 3 weeks ago.

We’ve been using the MM update as beta since the beginning but now its available to everyone, we can give our full review of this update.

First of all you need to know, if you’re a beta tester you don’t need to do anything to have the final release as is the same you’re carrying right now.

Overall it is a welcome update, but as weird as it sounds this device seemed to be built to run MM to start with.

Some of the improvements like DOZE are here and with the built-in apps permissions the DTEK suite is now a it’s full power.

We also have new keyboard features the depends on your preference could be great or not.

And last but not least: the camera software was also updated to add two new features.

The device was really fluid to start with, but since the update you now have faster transitions and animations between screens.

Statically looks exactly the same, but is now easier to make changes on the launcher (if you’re still using BlackBerry launcher)

Some users reported heat issues on lollipop, some of which I faced myself, but were mostly on heavily intense apps like a game with unreal engine which demand lots of graphic consumption, and just after a while.

After the update, ram management seems to be addressed and even though you can feel the warmth is nowhere near it was on LL.

The battery on the PRIV and in any other smartphone is something subjective, as the use of it vary from one user to other.

But in general you’ll get a full and maybe a little more of usage, with the doze feature the battery consumption is really good.

The PRIV security is one of the selling points of the device, previously commanded by DTEK now gains a boost with the granular permission that MM offers.

So, you can see if an app is accessing your location a 100 times in less than a day and proceed to denied that access.

Also if you were using the picture password as your main lock screen you’ll be asked to add a pin or a pattern to improve the functionality. This secondary step will be asked in some particular functions or after you reboot your phone.

As an extra, if you look in settings and about phone, you’ll see that now you have the May security patch.

The HUB is the main source of information (or that’s what BlackBerry says) on your phone.

Now after MM is more integrated within the phone software with extra notifications.

Now there’s support for more apps like IG, Skype and even Slack.

If you’re one of the PRIV adopters who’s not coming from a BB10 device I strong recommend you to make used of it. As the productivity edge it’s interlace with it and if you use the Outlook calendar as well the Google one you’ll have the two on the glance screen of the edge.

The PRIV’s keyboards are the other selling point, as is the only flagship phone to sport a Physical KB built-in as well as the Virtual keyboard.

The software that goes along the phone’s KB is good. But now you’ll have Swipe functions to use, not only on the virtual keyboard but the physical too.

Make use of it has a drawback, you lose the “swipe left to erase” feature.

This “new” gesture can be turn on and off on both sides in the options menu, under “keyboard settings”

They are independent from each other so, as me, you can have it on for the virtual and off on the physical one.

The camera on the PRIV is good, maybe not one of the top 3 but definitely a good performer.

The software received two new additions in the form of video recording, one is a well-known feature on flagships phones but which was missing from the first release, this is the 120fps slow-motion but you need to have in mind that there’s no audio on this mode.

The second mode added to it is a not so common 4K recording at 24fps which promises “cinematic quality” to your videos.

Something I was personally waiting was manual controls through the Camera2 API but I guess we’ll have to wait for another update.

Another cool feature added is the ability to launch the camera from sleep mode with double pressing the power button as the nexus devices.

The PRIV a great device, made even better with Marshmallow, the inclusion of DOZE, and the boost to DTEK with individual apps permissions are going to make feel you finally have the phone you paid for.

There’s work to be done though, you can find a little lag with some apps and the camera software needs more work.

The Android 6.0.1 update is available since April 26th for PRIV owners who shop directly from ShopBlackberry and Amazon with models:

The carrier models such as STV100-2 and STV100-3 will have to wait till MAy 3 to start recieving the update.

Overall the update is greatly welcome, fixed some of the issues you could find on Android 5.0 and gives you really functional extras. But with the next version of android just around the corner. The real question now will be:

Is the PRIV ready for Android N?

Let us know your thoughts in the comment section below, or tweet us at @techbuzzireland and @VicenteA_George