The HTC 10 is officially here By @VicenteA_George #HTC10 #Android #HTC 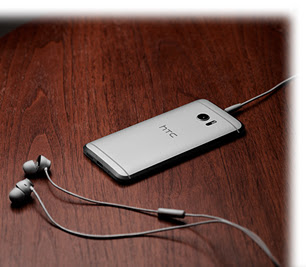 After all the leaks the rumors we’ve seen lately, the much anticipated HTC flagship is finally official.

During the morning HTC unveiled their 2016 model, which hope to bring the company back again, let’s see what’s new on the HTC 10

All we heard is true, the phone is made by a full metal body with a slightly curved screen to boot.

The back is a one piece metal construction chamfered rear frame that looks quite stunning, the front is a full QHD 5.2″ screen that goes just on par of recent flagships.

The exterior although has changed is rather familiar to those who have used HTC phones in the past. Something really good about this model is that gives the user best of both worlds, adding fingerprint scanner to the security suit but bringing back the lovable Boomsound speaker, though in a different way.

The speakers are now placed one on top of the screen and the other at the bottom of the phone, meaning that is not longer full front facing audio but stereo regardless,rather oddly placed having said that especially when holding the phone horizontally.

The FP scanner is place at the bottom of the screen like on Samsung devices and also acts as home button.

We have a familiar but different button and ports selection, as we have the volume rocker on the right side, just on top of the power button that now comes with a rugger finnish

Something extra HTC is claiming to have is a differential audio performance, they improved the output from the headphone amp to provide 24-bit audio.

The battery on the other hand is not so impressive (at least on paper) with just 3,000 mAh, but being a Qualcomm powered device it comes with fast charging able to give the user half the charge is just 30 minutes.

Now a rather weird decision from HTC is the processor, they will have a full Snapdragon 820 for the US variant but a lower model for other regions (which is quite annoying as is becoming a trend like the G5 case)

We have 4GB of RAM as you’d expect and to options for internal storage, one of 32GB and the other of 64GB both of which comes with expandable SD card slot up to 2TB.

For software we have Android 6.0 MM with Sense 8 UI on top. But this version of Sense has been heavily modified to deliver a unique experience when composing you home home screen as now you won’t be limited by the usual ratio or options.

And last but not least the Camera.

If there’s something HTC has been criticized for is the camera. They were ahead of its time when the brought the “Ultrapixel” technology but after years of development they’ve seem to find the perfect spot.

The rear shooter to is a 12MP second-gen UltraPixel sensor with a f/1.8 aperture, which promises outstanding low-light performance.

Also we hace a dual tone flash, laser autofocus and OIS , with a bunch of software features like 4K recording, Zoe Capture, a 12X slow-motion, RAW files and a Pro Mode.

The front camera is a story on its own as it has a 5MP wide-angle sensor with a f/1.8 aperture and OIS.

Here’s the promo video the company released alongside the announcement this morning:

If you want to pre-order yours go HERE

Now, let us know, What do you think about HTC’s new flagship? Will you jump on the HTC boat again? Leave your comments below and stay tuned for more