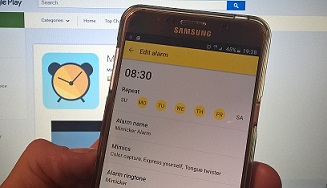 Microsoft have made another App for Android,this time Microsoft Garage have created basically an Alarm Clock app which there is plenty of and nearly all mobile phones have one native installed,albeit you need to complete a few tasks on this app rather than push a button and its free,At this point in time I have to wonder why Microsoft keep doing this when several mainstream apps such as Instagram which still remains a BETA and their official Twitter and Facebook apps are just trash compared to iOS and Android.

The app gap still remains a problem,local apps in Ireland and im sure in other regions remain a huge problem effectively pushing people away from the OS,Windows is a real nice looking OS with live tiles but the app gap is growing and people have had enough and to see MS continue to make apps for other platform surely is pissing people off and makes you wonder what is coming down the road in the long term..Sure it is nice to see more apps on the Android/iOS platforms but they do not seem so hesitant to return the favour..

Mimicker Alarm, a Microsoft Garage Project, is a free morning alarm clock app that helps you wake up and stay up by playing a simple game, called a “Mimic”. To dismiss your alarm, you must mimic the action given. We might ask you to snap a selfie, speak a phrase, or even get out of bed! The Mimics require you to be alert, smart, and use you and your surroundings so be ready to move.

Watch out – if you don’t finish the game in time, we’ll assume you’ve fallen back asleep and your alarm will start ringing again. Once you complete the Mimic, share your personalized results with your friends and show how you beat the clock.

Features include:
* First run experience to help you learn the app
* Alarm customization for time, day, ringtone, snooze and Mimic
* Multiple Mimics to wake up with: Match the expression, capture the color, complete the tongue twister, or shuffle between all three
* Personalized images you can share with friends after each alarm