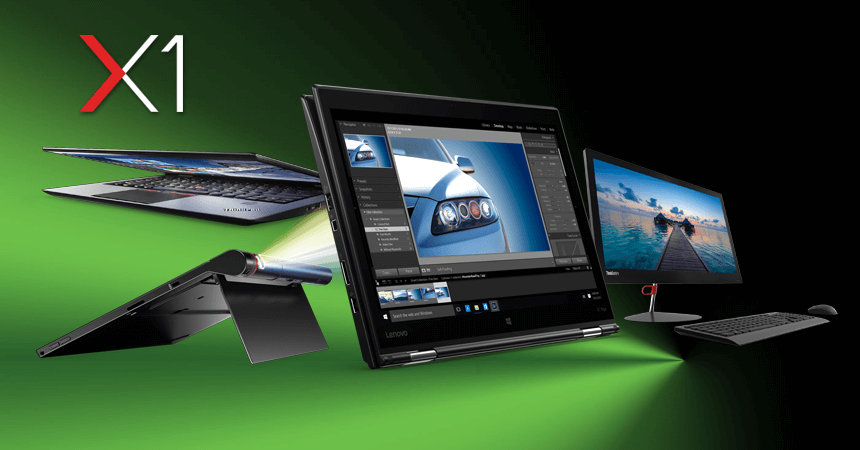 Is that time of the year again! we’re bringing you all the info about the #CES2016 and this time is Lenovo‘s turn with the recently announced ThinkPad X1 family for 2016

First of all we have the ThinkPad X1 Carbon

This model is the new Ultrabook for business, made from “Satellite-grade” Carbon fiber this device is built to last and even though the material of choice is super slim and lightweight with just 2.6 lbs (1.18 kg) and just 16.5 mm this thing is super portable.

The X1 Carbon packs a 14-inch screen and comes in two variants one with a 2K (QHD) with 2560 x 1440 pixels and another at FHD with 1920 x 1080 but is worth notice that the screens are not touch, apparently Lenovo has move the touch part to they Yoga Line entirely.

Both of them powered with the 6th generation Intel Skylake Core i5 and Core i7 processors up to 1TB and a battery that Lenovo claims last up to 11H.

Apart from that we also have:

All of that packed in a really tiny and slim design with the option to go for an LTE model.

Also we have the ThinkPad X1 Yoga

The X1 Yoga is a practically the same device as the X1 Carbon, with some minor but really attractive differences.

First of all, the X1 Yoga is a 2-in-1 device ’cause it brings the famous hinge from the original Yoga Line up that allows the laptop to convert itself into a tablet.

The main reason behind the adoption of the touch screen feature, also the this model has Active Stylus support.

The X1 Yoga also offers two screen options but the difference between the two is the technology behind, as you can choose a IPS or an OLED panel for your model.

The laptop can be made “a la carte” letting you pick one of the 6th generation Intel processors the Core i5 or the Core i7, with different amounts of RAM up to 16GB and a maximum of 1TB storage.

The also include Stylus Pen is powered by Lenovo’s WRITEit technology which is perfect for PDF’s and works with all kind of app.

And as well as the Carbon model the X1 Yoga offer LTE option and up to 11h off battery with quick charging capability.

The rest of the specs are mostly the same and the X1 Carbon.

And last but least we have the ThinkPad X1 Tablet

Here once again we’re seeing a direct competitor to the Surface, using a Intel Core M processor. Lenovo find a way to offer almost full PC experience to their business customers who want something with more features.

The X1 Tablet has a 12″ inch screen with a rather weird resolution at “FHD+” which is practically 2K but the different probably lies on the 3:2 aspect ratio (kinda like the Pixel C)

Also this devices is really special and that’s because it has a modular setup, you have 3 modules to choose from and add awesome functionality:

The first one is the “3D Imaging Module” has a 3D intel RealSense camera, for scanning objects in their original form.

The second one is the “Presenter Module” has a “Pico Projector” that can create a 60-inch screen in aprox. 2,5 feet.

The last one is the “Productivity Module” which gives you extra USB 3.0 ports and a Full sized HDMI port.

The tablet also have a USB-C port a Mini DisplayPort a Built in kickstand and slot for Micro SD card as well a 3.5 mm jack.

The availability of these devices change from one to other but goes from January to April and about pricing:

The X1 Carbon: will be available in February starting at $1299.

The X1 Yoga: will have the IPS version available in January starting at $1449 while the OLED version will be ready for April.

The X1 Tablet: will be ready on February starting at $899 the modules will sold separately  and will be priced at $149 for the 3D module available in April, $149 for the Productivity module and $279 for the Presenter module.

So, what are you thoughts about this #CES2016 start? Let us know in the comments below or tweet us using #tecbuzzireland